See what others are saying

“I went to the doctor yesterday and all my levels are in check. My glucose is back in the normal range. I’m no longer pre-diabetic. I think it’s all because of this program, so thank you.” –Carolyn, Program Participant

“She has set a new goal three times since she started the program in February. Because she met her first goal of 7% weight loss by week 8, she set a new weight and physical activity goal which was met in September. Her physician informed her that after her blood work she is no longer pre-diabetic! She is now working on her goal which is to continue her forward progress!” –Lifestyle Coach Betsy, about a program participant

“After years of being overweight (over 300 lbs) even with daily exercise habits in place, this participant made some serious lifestyle changes during the first few months of the program. He traded nightly bowls of ice cream (a habit he attributes to his grandmother always doing the same thing with him) for fruit, he traded bacon and sausage loaded breakfasts for cereal with low-fat milk and a banana. He not only reached his goal of losing 5-7% before the end of session 16, but he ALSO says he weighs the least he has since he can remember.” –Lifestyle Coach Tony, about a program participant 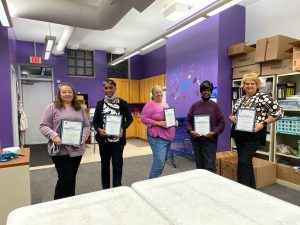 “Never in my life have I been so pumped to move and eat healthier at the same time! It ALL started with the YMCA’s Diabetes Prevention Program and my amazing coach!”–Sue, Program Participant

“I’m 58 years old and this is the best I’ve done. This class is the best thing I’ve ever done.” — Kimberly, Program Participant

“I can’t thank my coach enough. I have been on this journey most of my life and this time, it’s just clicked. This has been a huge success for me, thanks again!” — Mary, Program Participant

Want to know if you’re at risk?

Congratulations! You’ve successfully completed the YMCA Diabetes Prevention Program. Now that you’re
done with the program, we want you to continue to feel supported. We’ve created an Alumni group for
graduating members to gather together for activities, support, problem solving, and encouragement.
Below are the next dates planned for our group to get together.

Please bring a water bottle and wear
comfy clothes! We will be moving around
and can modify this activity around any
fitness level.

POSTPONED UNTIL WE CAN MEET TOGETHER

POSTPONED UNTIL WE CAN MEET IN PERSON

Learn new ways to create holiday recipes
such as a cheese ball and dips.

Please bring a water bottle and wear
comfy clothes! We will be moving around
and can modify this activity around any
fitness level.

If you are interested in signing up, or have more questions please use the “Email YMCA” button below.